How to report abuse an idea

Written by Anika Tasnim
Updated over a week ago

Report Abuse option helps in detecting and reporting any sort of abusive, inappropriate language into the idea in the community.
Only admin and standard user of the community can flag idea as Abusive submitted by the community members itself.

This section falls under Advanced settings.

This section falls under Basic settings.

How to Mark Idea as Report Abuse

3. Enter the number of times the idea has to be marked as ‘Abuse’ for Abuse threshold

4. After reaching on the threshold value, an idea would follow the behavior which has been set in the 'Action'

5. Actions can be triggered for:

Report Abuse notification can be set up by following few actions.

Mark Abuse:
If the action set as Mark Abuse-

After reaching the threshold value, the idea would be moved into the incoming moderation dashboard for moderator approval. For this action, the idea will be marked as 'Abuse' after approval by the moderator. 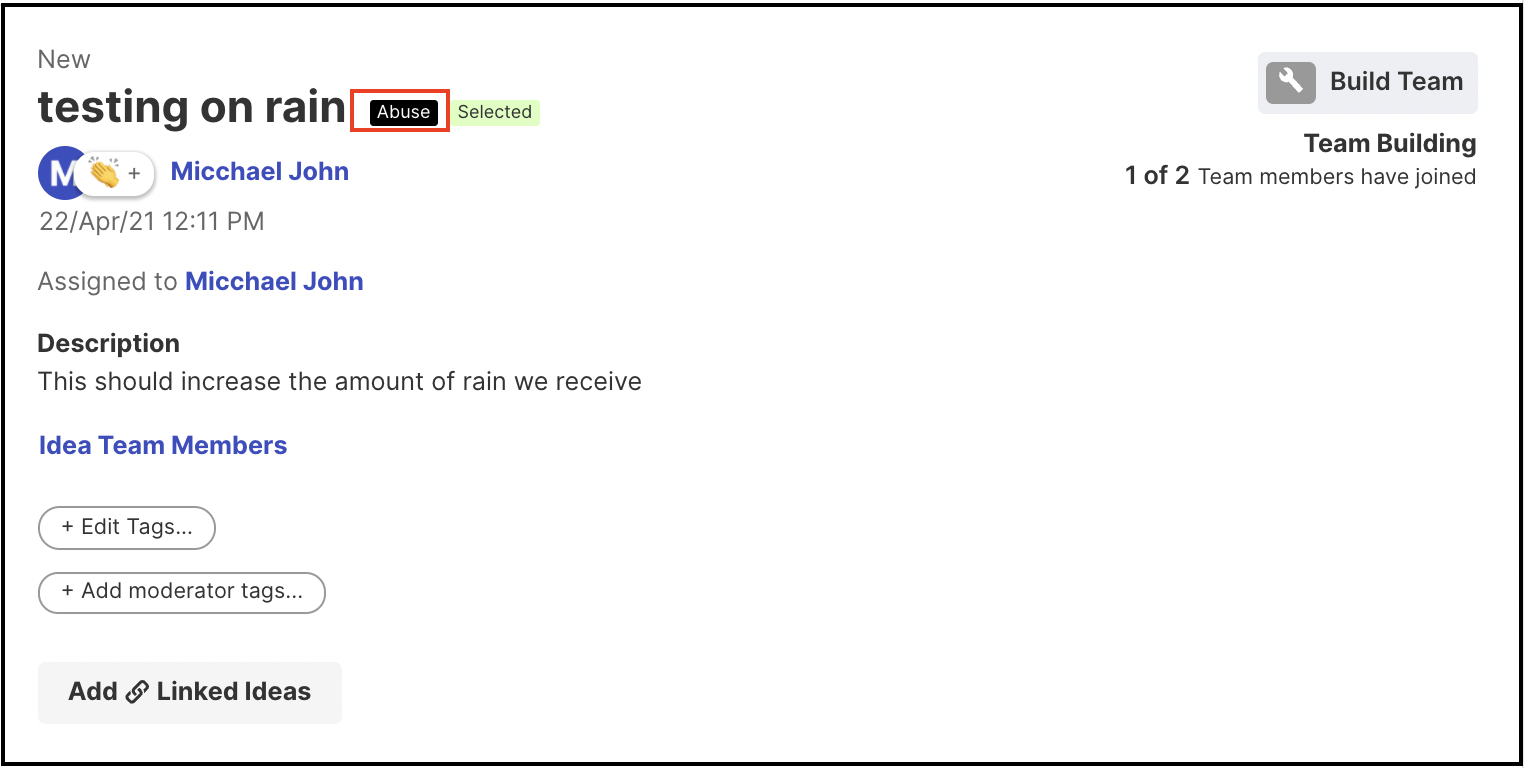 After reaching the threshold value, idea stage will be changed which has been selected in the action.

If the action set as Notify Member-

After reaching on the threshold value, a group of people will be notified that idea has been met 'Abuse Notification' rule.

Please Note: For 'Notify Member' action idea will be only marked as 'Reported'. The idea would not move into the pending approval stage for moderator approval.

1. Click on the Report Abuse link on the idea.

2. In Grid View and List View the Report Abuse link will be displayed in the three dots button which is meant for more actions. 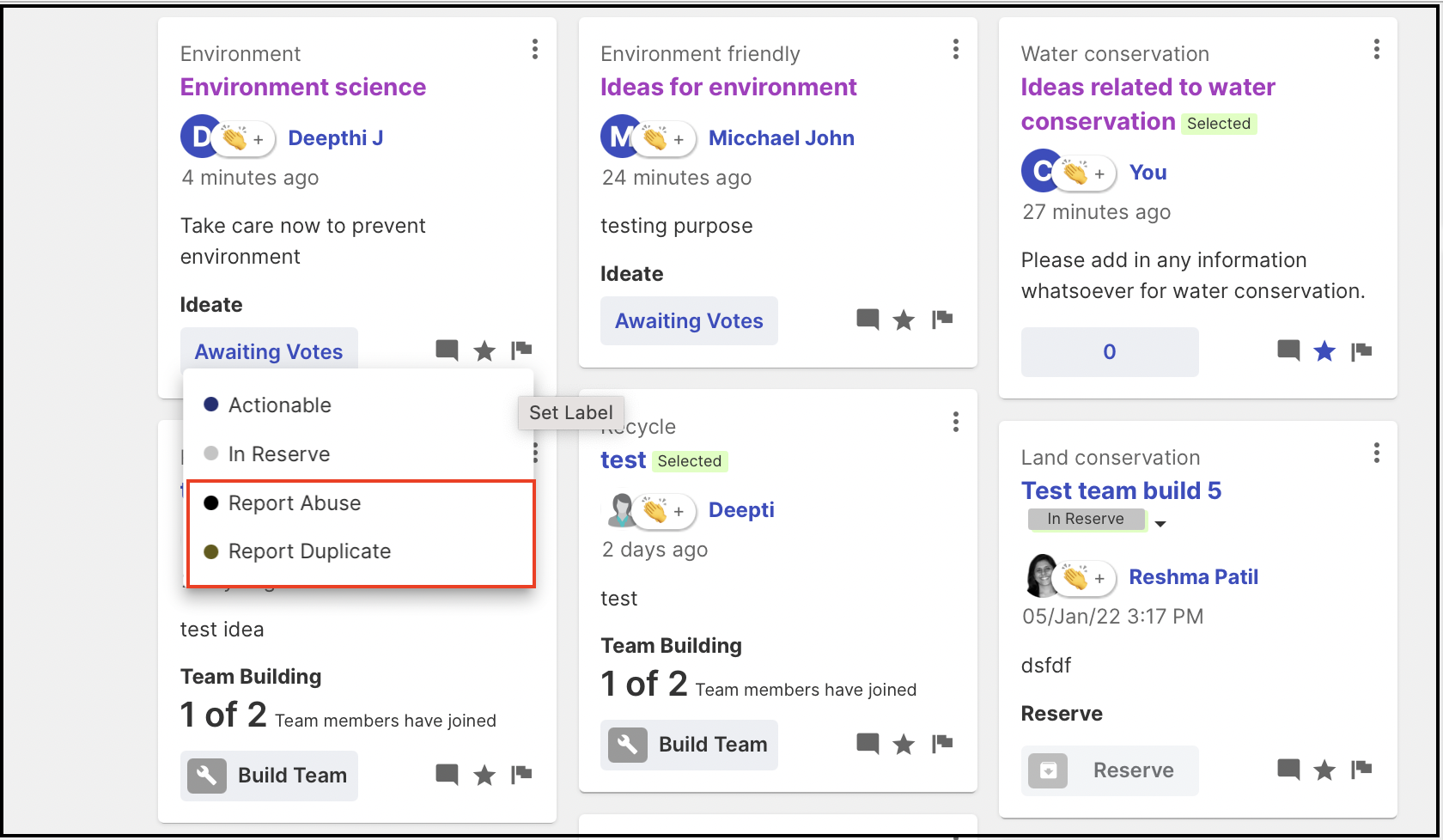 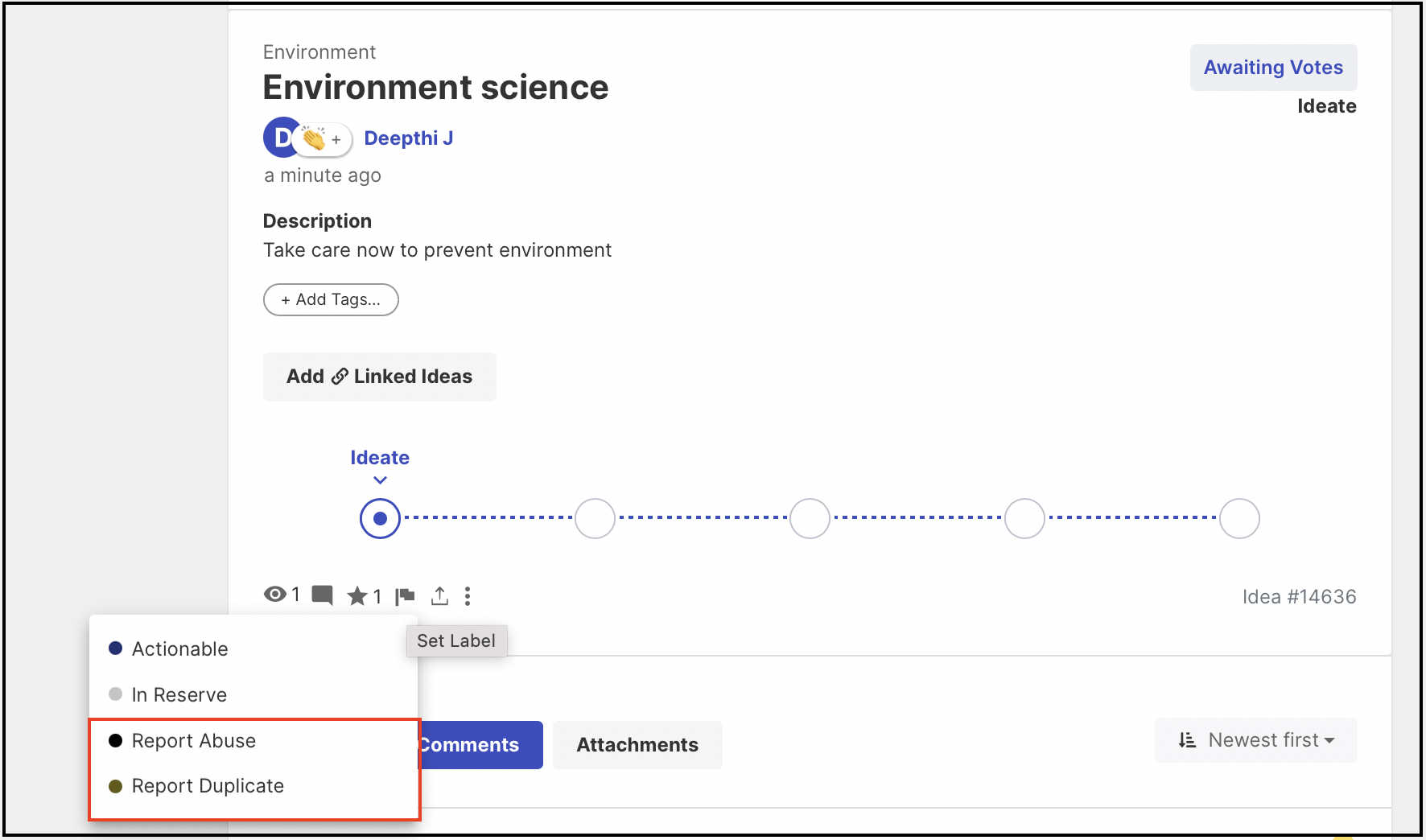 3. As soon as someone reports an idea and the threshold is met the idea will move into Pending Approval state with the message-

'You have reported this idea as being inappropriate. It will be removed when enough people flag it'.

4. The idea submitter will receive an email notification of 'Mark Abused' as shown in the below screenshot. 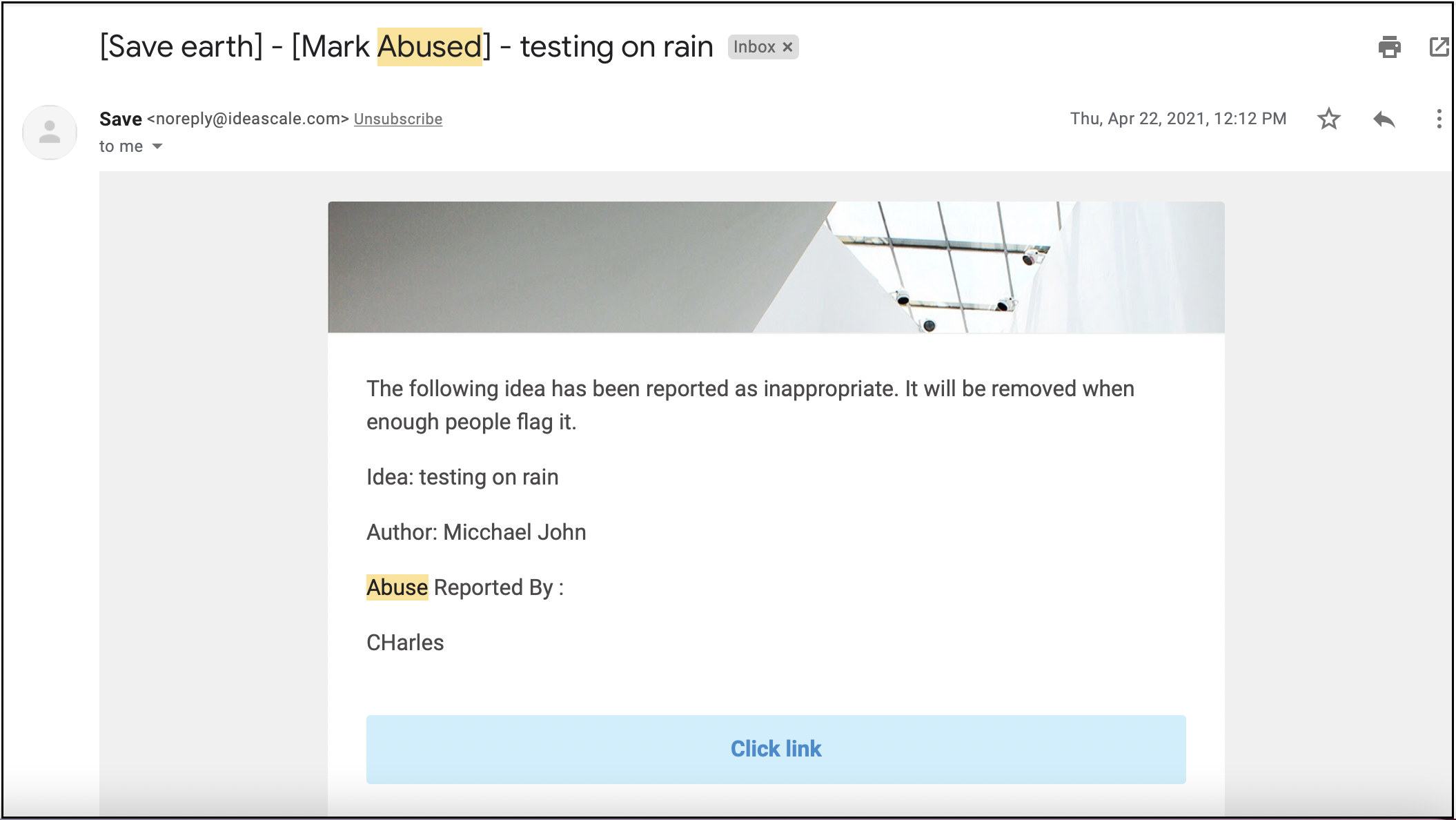 5. After clicking on the link from an email, it redirects the idea submitter to the idea details page and sees it’s in the pending approval stage for awaiting moderator approval.

Report abuse comment link helps in detecting and reporting any sort of abusive, inappropriate comment on a specific idea in the community.

1. If a standard user posts a comment, only then Report Abuse label is visible to other standard users on the comment as shown in the below screenshot.

2. Any Standard User reports a comment as abusive will move into the Pending Approval stage as shown in the below screenshot.

3. The moderator will receive email notification for Comment Flagged. 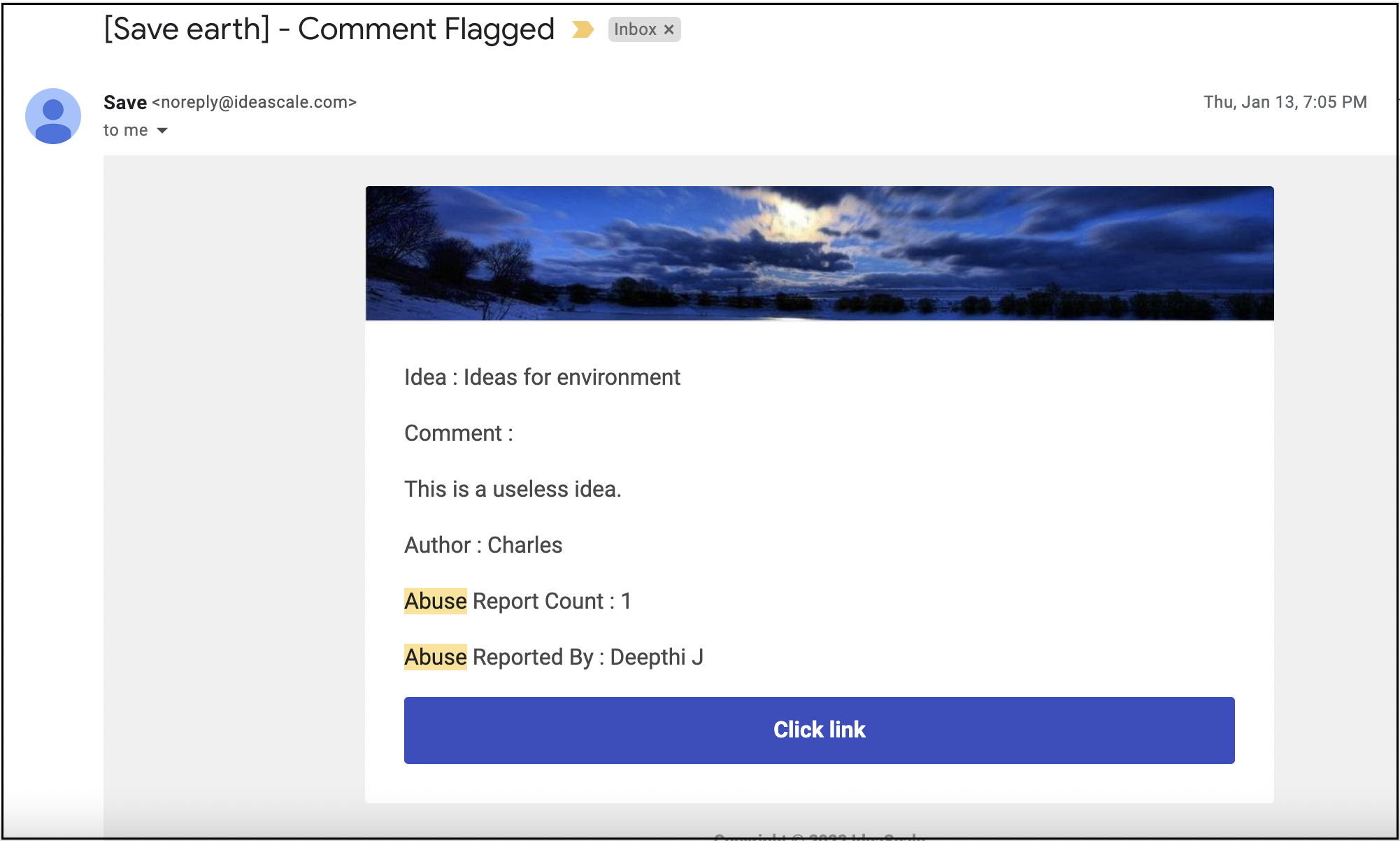 4. Moderator can approve the flagged comments from the Incoming Moderation Dashboard.

5. After approving the comment by the moderator, the comment will be published with a label as "Reported".

How to manage Duplicate and Abuse Ideas