Control visibility into your campaign

A private campaign is only visible to certain users who are invited to participate. This is controlled by the administrator of the community.
Private campaigns are achieved by adding users to a Group. The user's Group allows them to view and participate in the ideas of the campaign/s to which they are given access to.

Note: Private Campaign are by default visible to all the Global Moderators and Campaign Moderators of that particular campaign, irrespective of assigning a role or invitation.

How to make a campaign private: 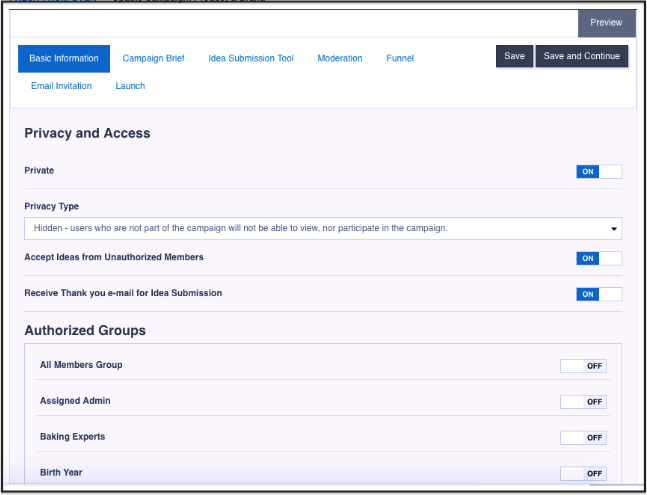 A) Accept Ideas from Unauthorized Members :  When "ON" , the users who are not authorized to participate in the Private campaign (meaning they are not a assigned to the Group authorized to participate in the campaign) would be able to submit ideas in the campaign. They would be able to see and choose the Private campaign listed in the "Campaign" drop-down in the idea submission form , however this campaign name will not be visible to under "Active Campaigns" list visible on the right panel of the home page. Thus the user is only able to submit his idea in the private campaign but prevent him from viewing / voting / commenting on the ideas in the private campaign.

Please Note: Receive Thank you e-mail for Idea Submission will be displayed only after we enable Accept Ideas from Unauthorized Members.

The screenshot below shows an unauthorized member is able to choose and submit the idea under the Private campaign "University". 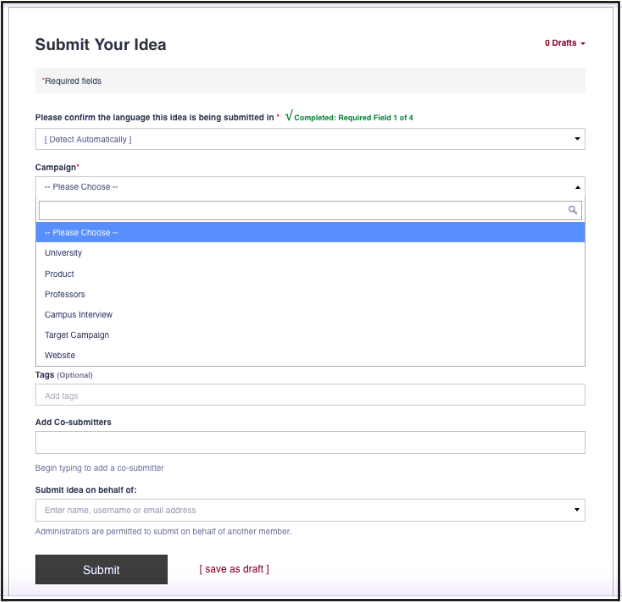 However he has no way access to the campaign since the campaign name "University" is not visible to him under the "Active Campaigns" on the home page. 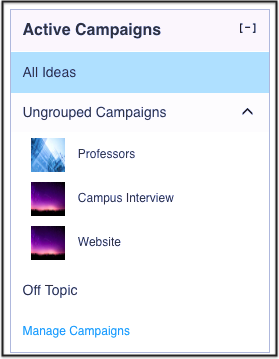 B) Authorized to : All the Groups are listed here . The Administrator sets the switch ON and authorizes the community roles to participate in the Private Campaign.

The screenshot below shows members belonging to few authorized groups and selecting these groups allow participants to participate in this Private Campaign. 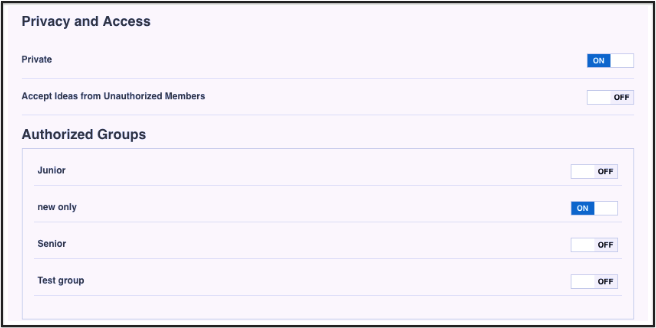 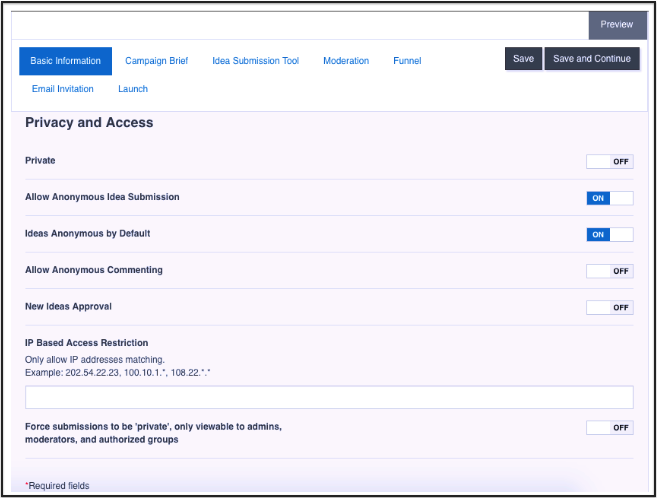 1. Allow Anonymous Idea Submission: This feature enables the users to submit idea anonymously in the specific campaign while in rest of the community his name will still appear.

2. Idea Anonymous by Default: Enabling the switch "Allow Anonymous Idea Submission" also gives you an option to enable all the ideas submitted to the private campaign to remain anonymous by default.

3. Allow Anonymous Commenting: This feature enables the users to submit comment anonymously in the specific campaign while in rest of the community his name will still appear.

4. New Ideas Approval: This switch when enabled will required an approval on Campaign level unlike the New Idea approval.

5. IP based Access Restriction: Access restriction based on IP address can be set for a specific campaign using this section. Please refer:  https://support.ideascale.com/setup/ip-based-access-restriction

6. Force submissions to be 'private', only viewable to admins, moderators, and authorized groups: This feature actually forces private submissions, because it does not give the idea authors a choice to elect to submit privately or publicly. It just makes all submissions to the campaign private by default. The result is that the author can see their own idea. And moderators, admins, and authorized groups can see the ideas.

NOTE: Ideas from Private campaigns cannot be shared via 'Email idea' option with the unauthorized members.